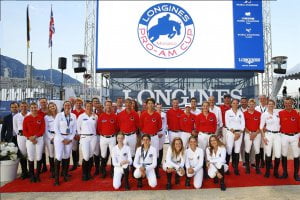 C Transport Maritime S.A.M are pleased to announce that we sponsored two athletes in this year’s Longines Pro-Am Cup in Monaco.

The competition is part of Longines Global Champions Tour this year marks the 14th time the competition has been run in Monaco. It took place in Monaco’s world famous Port Hercule.

The Longines Pro-Am Cup took place last Friday 28th June, 2019. The teams consisted of one professional rider and one amateur rider, riding in a relay format and wearing the livery of their sponsor. The team that recorded the fastest over all time won the Longines Pro-Am Cup. This year the title was won by the Monaco Aces team.

The team of Milena-Maria Pappa and Puis Schwizer wore the colours of CTM at this year’s event and came in a very close second place. 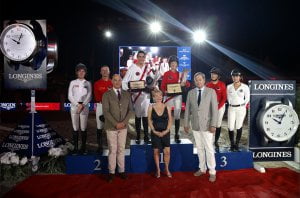 It was a battle against the clock, as the Monaco Aces team gave the chasing pack a target of 60.49 seconds to beat. Team CTM put in a great performance and came just shy of first place with less than a second between them and Monaco Aces in a time of 61.43 seconds with no penalties.  You can watch their ride by clicking here.

Congratulations to CTM’s team of riders in achieving second place at this year’s competition.

Here is some information on the two riders who made up team CTM this year.

Puis Schwizer our professional rider for this year’s tournament comes from Switzerland. He is an Olympic Bronze medalist and a European Gold medal winner.

Milena-Maria Pappa our amateur rider comes from Greece. In her amateur career has four event wins under her belt.

Everyone at CTM congratulates these two athletes in on their achievement.

*The two group photos were taken from the Longines Global Tour website : https://www.globalchampionstour.com/