Recently our CEO Mr. John Michael Radziwill was invited to participate in panels hosted by Capital Link (21 October) and TradeWinds (27 October) at this year’s Posidonia that was held online. It was extremely well organised by the Posidonia team and congratulations to them for still finding a way to bring the shipping world together during this difficult time. Below we summarize some of the key points that John Michael Radziwill aimed to convey on the panels.

Mr. Radziwill focused on China’s big economic stimulus package where we have seen “a big move towards infrastructure projects, the government issuing bonds and enticing banks to lend more to fuel all this.”

Indeed, the Chinese economy was able to return to relative normality thanks to accelerating infrastructure projects and massive bond issuance to pay for projects as well as strong bank loan growth.

For instance, the government has set a 2020 budget deficit of at least 3.6% of gross domestic product, up from last year’s 2.8%. 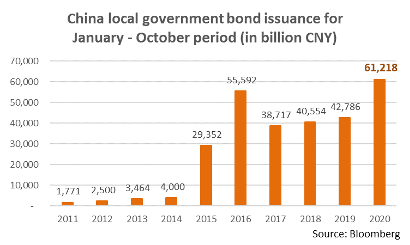 In the January – October period, local bond issuance was up by 43% compared to 2019, and approvals of railway investments by the government jumped by 35% compared to the same period last year.

Latest data from the Chinese National Bureau of Statistics (NSB) shows that the recovery of the Chinese economy continued to accelerate in October with fixed-asset investment rising by 1.8% in January-October compared to the same period last year, up from a 0.8% increase in the first nine months of the year. Investment in real estate increased by 6.3% in the January-October period accelerating from 5.6% in the January – September period.

The production of construction-related materials has seen strong growth as well with crude steel output increasing by 12.7% year-on-year in October and cement output rising by 9.6%.

This massive infrastructure investment by the Chinese government has had a positive impact on shipping and “iron ore has been the big story as the growth of Chinese iron ore imports has been substantial”. 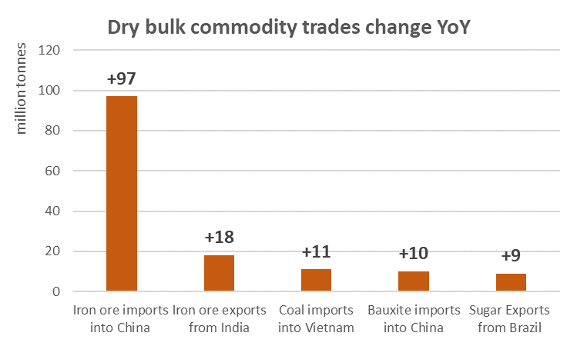 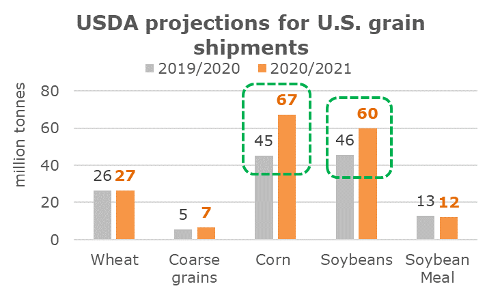 The grain trade is also promising going forward with the United States Department of Agriculture (USDA) predicting U.S. grain shipments during the 2020/2021 Marketing Year to be 38 million tonnes higher than in 2019/2020.

“I am pretty confident that with the growing agro trades and with the demand for iron ore, bauxite, coking coal and all the things needed for infrastructure it’s a fairly compelling situation going forward.” 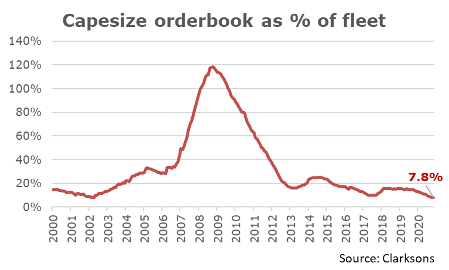 Mr. Radziwill then brought attention to the current size of the Capesize orderbook that is at its lowest level since at least 1996, which is the result of very limited ordering since the beginning of the year (only 9.1 million deadweight tonnage has been ordered between January-October, down 64% compared to the same period last year).

Now if you have ever heard Mr. Radziwill’s opinion on newbuildings then his answer shouldn’t come as any surprise to you.

“First off I will not be building LNG fuelled bulk carriers or any other bulk carriers, because I have said a thousand times I am not going to order a new ship and add more supply to my [dry bulk] market.”

Mr. Radziwill has always recommended that shipowners should look to the second-hand market before heading to the shipyards. So, when asked, whether, if there was a lack of supply would he be willing to invest significantly in more second-hand tonnage?

“Yes, I would and in fact I would recommend it, I think that asset values are very low right now, the differential between new building pricing and second-hand pricing especially for the dry bulk sector is very compelling. Currently you’re looking at a 25% difference between a new building and a 5-year-old on average and on a ten-year-old its 58% so the second hand-market is very compelling going forward.”

When asked how the shipping world can improve its ESG and lower carbon emissions? Mr. Radziwill has been championing mandatory slow steaming for quite some time now, here is what he had to say on the matter:

“We should have a mandatory speed limit. What I would like to say to all the people making these decisions – every day you don’t institute mandatory slow steaming, (which can be done right away) you’re doing damage to the environment. In the last fifteen years the global fleet size has probably gone up about 1.2 times we are actually emitting less CO2 the main reason is that we are going slower, bulkers are 20% down, containers are 25% down and tankers are 20% down. Slow steaming works, it can be implemented immediately, and our environment is everything. It’s not de minimis, its effective and we can do it right now. Instead, and I will give you this extreme example of what we are doing in dry cargo right now, we are speeding up ships to go wait in queues for about a month, that is literally happening right now, and I think that the IMO should be doing something about it.”

We would like to thank Capital Link and TradeWinds for inviting Mr. Radziwill to take part in their respective panels during this year’s Posidonia and we hope for things to be back to normal for the next one.

C Transport Maritime was founded in 2004 and is headquartered in Monaco. Today it is one of the largest dry cargo shipmanagement companies globally focusing on Chartering, Sale and Purchase, Operations and Technical management as well as being a specialist in pool management. CTM employs over 85 people from 13 different nationalities and directly operates about 130 vessels, ranging from Supramax to Newcastlemax bulk carriers, and over 200 vessels when including Capesize Chartering Ltd. which it co-founded with Bocimar, Golden Ocean and Star Bulk and in 2016.